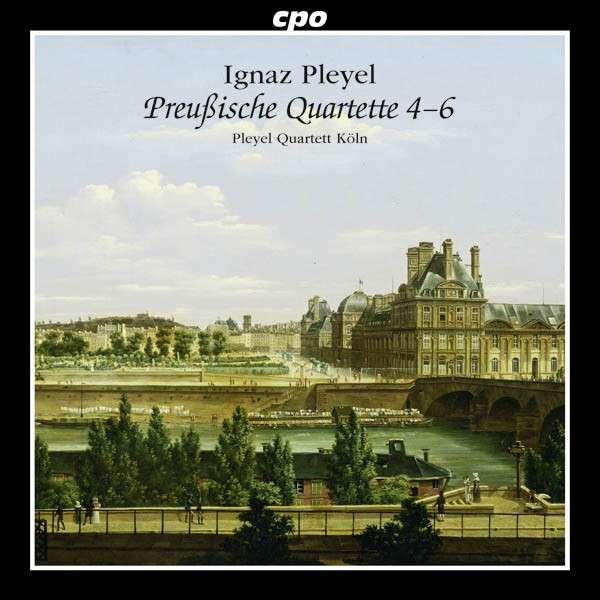 After the enthusiastic response to their debut CD featuring Ignaz Pleyel’s Prussian Quartets Nos. 7-9, the Pleyel Quartet Köln now turn to Nos. 4-6 from this same series. Klassik-heute rated the first CD with 10 out of 10 points in the category of artistic quality, and in the accompanying review we read of the Pleyel Quartet’s fine musical touch: »The astonishing thing about listening to this recording is how well the Cologne quartet is able to infuse the recording with its conviction about Pleyel’s quality as a composer. […] The technically demanding tone-color dramaturgy typical of him is made to shine so brightly by the virtuoso artistry of ‘his’ quartet that not the slightest thought of pleasant functional music suggests itself.« Quartets Nos. 4-6 again demonstrate Pleyel’s extraordinary feel for the employment of keys in keeping with their typical character, and his elimination of the courtly minuet movements shows his emancipation from his teacher Haydn as well as the almost provocative effect of his independence from his dedicatee, Frederick William II. Pleyel’s appealing but artistic writing style, his feel for drama, and the soloistic demands placed on each and every quartet member earned his string quartets by far the highest performance figures in music-crazy and musician-overrun London during 1785-1800. Ninety-nine performances are attested for them from this period – as opposed to the runner-up Haydn’s thirty-nine performances. This series likewise shows that Boccherini was right when he assigned a personal quartet style to himself, Haydn, and to Pleyel too.

MUSICWEB-INTERNATIONAL
»[...] praise is sure to be repeated with this second volume, where the attractive confidence, technical mastery and telepathic ensemble playing that characterised the first disc is again everywhere in evidence. All four players are given ample space to shine by Pleyel's quite evenly-distributed parts, and none disappoints. As a matter of fact, the PQK give as historically authentic a performance as is possible here, by dint of consultation of two early editions of the Quartets and their fine-sounding period instruments, all originals from the 1700s. With luck, the PQK will be persuaded by cpo to record in due course the remaining six 'Prussian' Quartets«